At my job, we like to keep our team updated with all the dev work we do each week. This means we have meetings every Monday to review the work that has happened since the previous week.

I often like to review the work done over that time frame by looking at the projects git log for all the pull-requests merged during that previous week.

Now, I could open up the develop branch and run a git shortlog --since "1 week ago" every Monday, but I would much rather automate this task so I don’t have to remember to do anything and it stays consistent. I can just wake up on Monday and see a pretty little report printed in the project Slack channel.

The way I accomplished this is using Make.com (formerly Integromat). This is a “no-code” tool that allows you to use visual programming to build tools and apps.

Let’s break down the solution I came up with:

Here is the overall solution laid out. As you can see, it wasn’t as simple as it might seem.

I will go through the solution step-by-step and explain each node. I will assume you already have Slack and BitBucket connected. 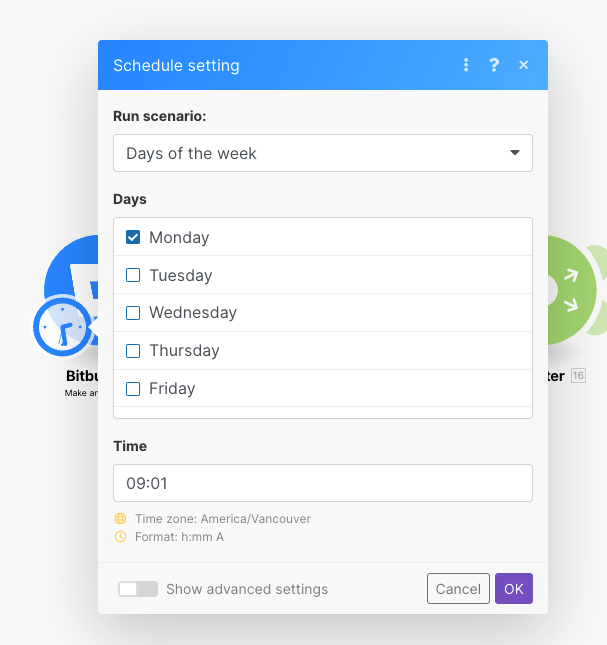 First we need set the schedule to run each Monday. Nothing fancy here. I set it to 9:01 just because I am usually on the computer by then so I will see the channel notification.

Here is the reason this is so complicated: the BitBucket API is paginated and there is no way to easily page through the results. So we need to loop through each page from the results and append them to a variable we eventually send to Slack.

In this request, we ask BitBucket for the “merged” and “open” pull-requests that happened last week. There was no nice way to calculate the previous weeks date, so we have this fun code to get the date of the previous Monday.

You can copy the text below for the query:

The only reason we run this first request just so we can get the page count that we will then use to create a loop to make the real requests. 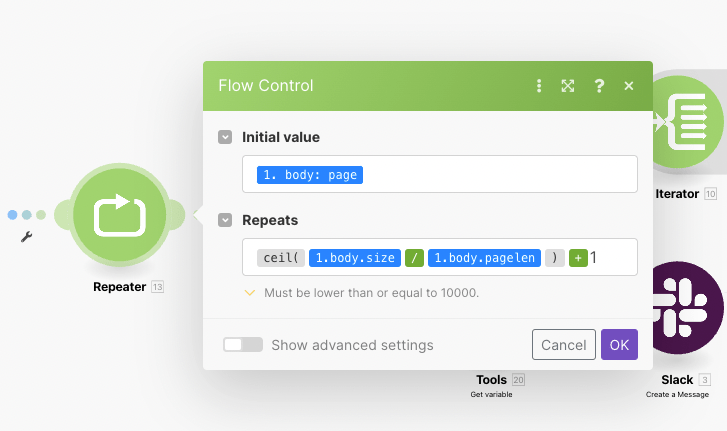 Here is the loop that we use to iterate over the pages in the results. We check the page size and make sure we repeat the right amount of times. 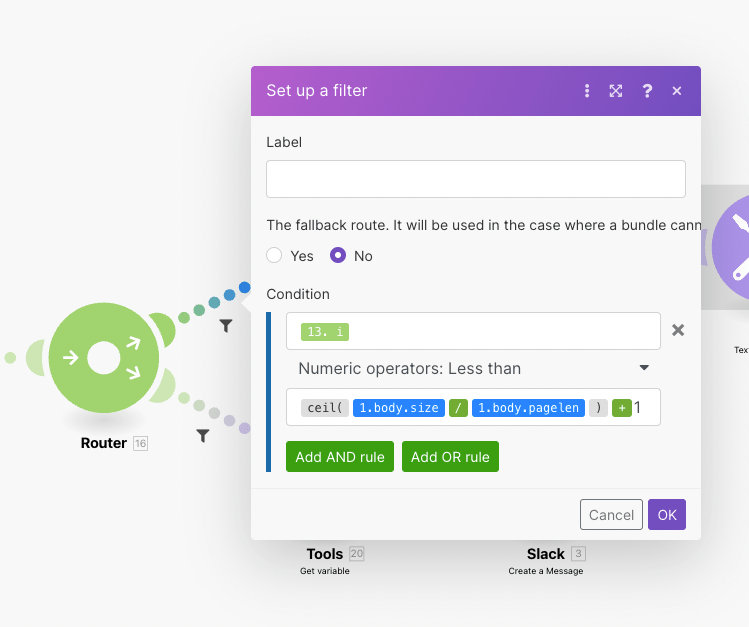 Our first route (the top one) is the condition that the loop continues to run in. You can see the condition is a basic for loop that repeats for each page in the loop. 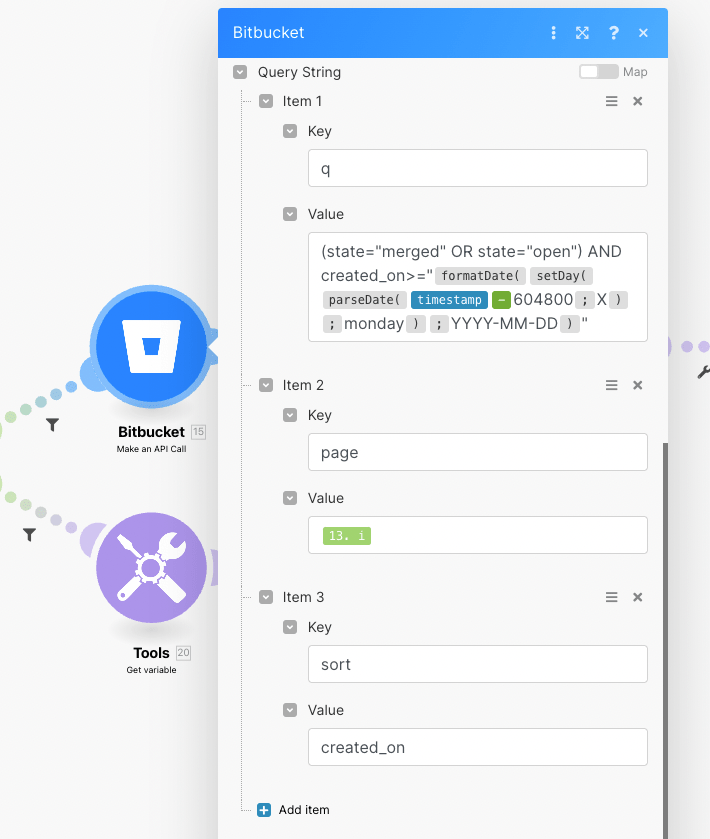 Here is the request that happens within the loop. It is identical to the first one but we have a page parameter so that we can get each page of the results.

All we are doing in this node is sorting the pull requests by their title. We do this because the PR number is in the title and not sorting it would look off. 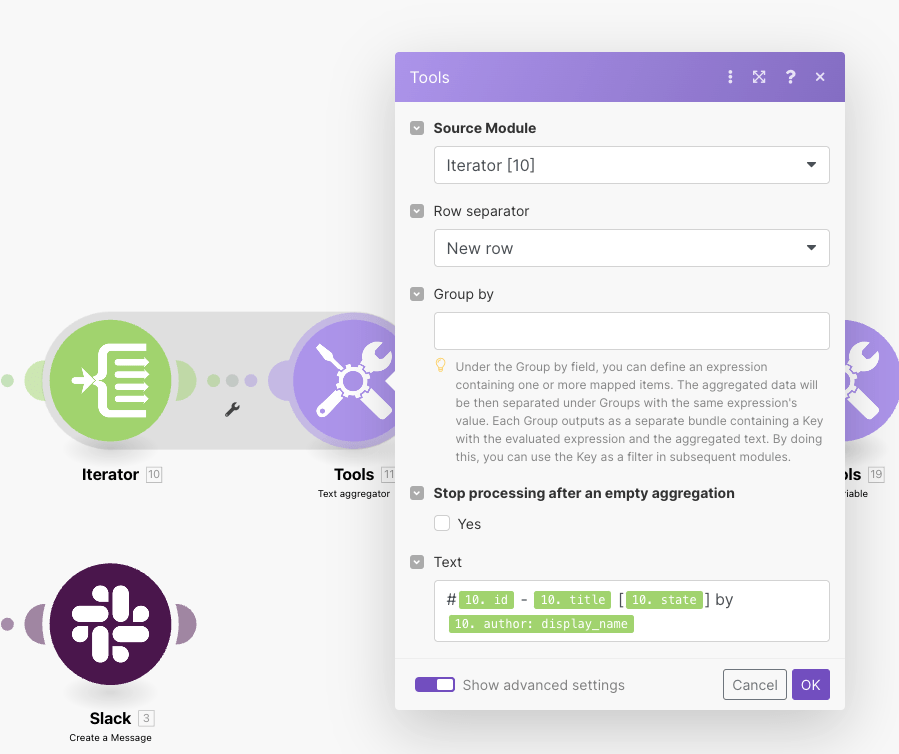 Here we are defining the string template for the PR titles that will go into our bulleted list. The output of this will be a single variable that contains all the row strings. 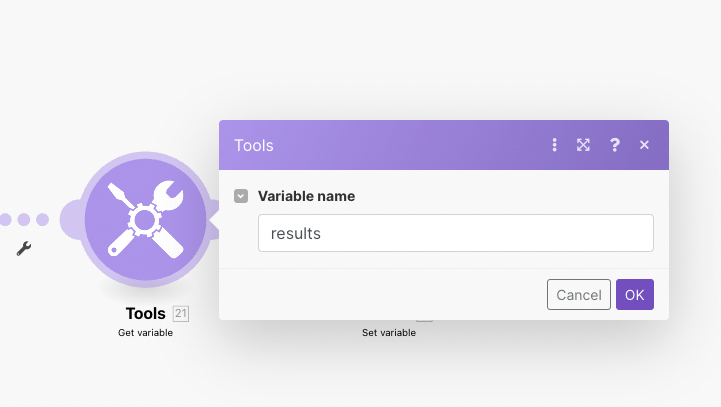 Nothing fancy here. Just getting the variable the we will be pushing the results of our text aggregation to. 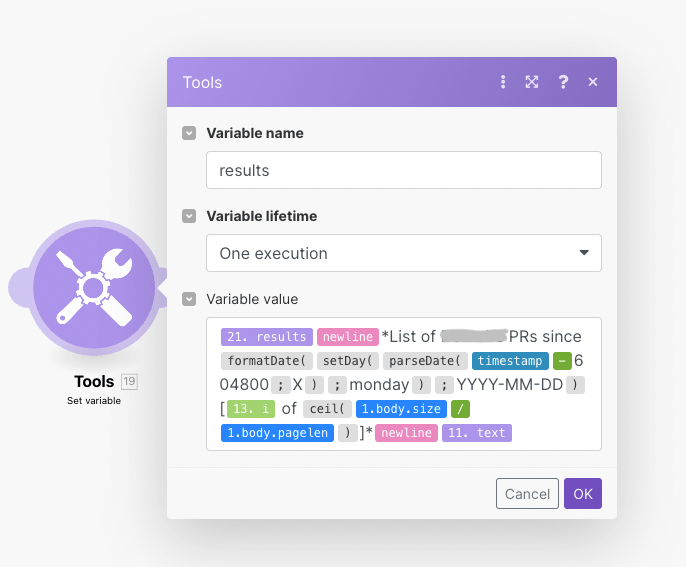 Here we are updating our actual results that will be sent to Slack. We break up the list with a nice header that is chunked by page.

Here is the code in the box for setting the variable: 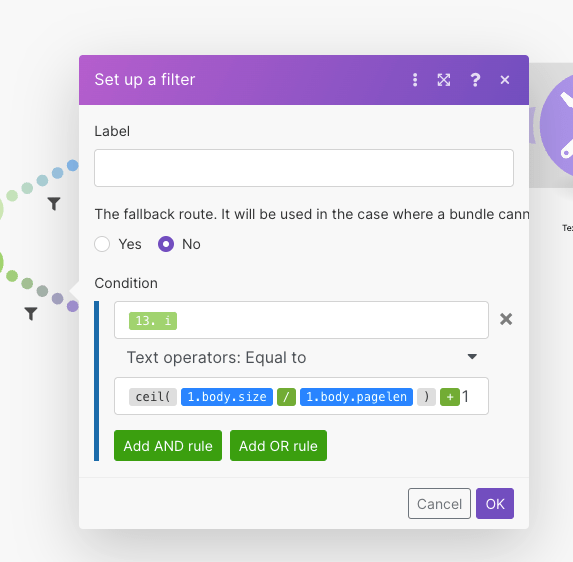 Here is the other condition in the router that will run at the end of the loop. It checks that the loop variable is larger that the page count.

Our first step in the end case is to get the variable. We are passing this to the Slack body. 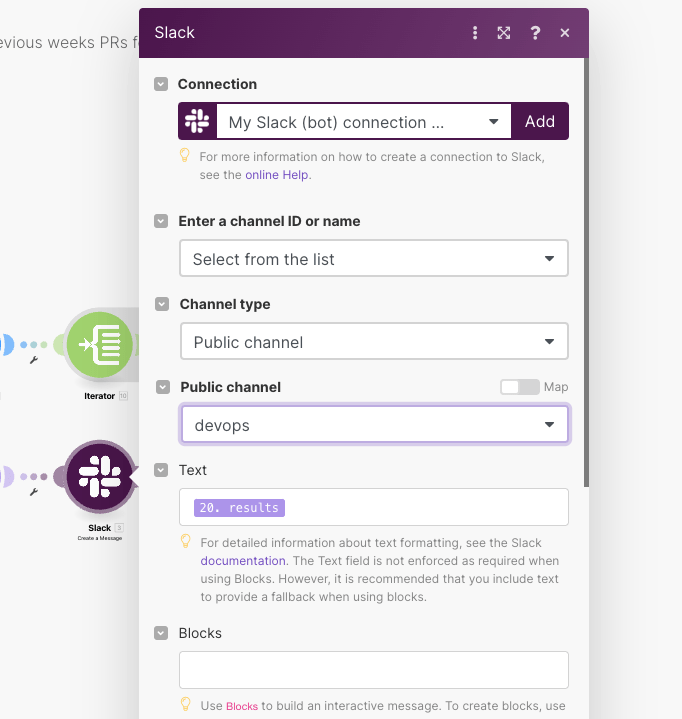 Our last step is to just shoot off that text to Slack. We have already formatted the text we are sending so we just slap it in.

That is it! Hopefully this helps anyone that is trying to use the BitBucket in Make.com (Integromat).

I'm a full-stack developer, co-organizer of PHP Vancouver meetup, and winner of a Canadian Developer 30 under 30 award. I'm a huge Open Source advocate and contributor to a lot of projects in my community. When I am not sitting at a computer, I'm trying to perfect some other skill.